So you’ve probably heard quite a bit about Vodacom’s NXT LVL campaign, but I don’t know if you know exactly what it’s about…

Yes, it’s a football campaign first and foremost, which I love, but it’s also just a really brilliant way of Vodacom giving something back to South Africa’s kids.

I spent my Saturday out in Tskane this weekend to see exactly what was going on for the NXT LVL campaign, and I was really impressed with what I saw. Around 500 kids between the age of 14-16 came into Tskane Stadium to record the video that could potentially kickstart their fledgling football career.

It came as no surprise to me that there were some good little players on show in all departments, but it was the actual prize on offer that impressed me the most.

Before I get into that, if you’re between 14-16 and haven’t registered yet, here you go.

Anyway, so the 100 players with the most votes will get to up their game at a soccer boot camp with the legends that are Lucas Radebe, Shorty Ndludlu and Mark Fish. Then the 32 best players will play in a live exhibition game and the winning team will get full scholarships to TUKS Sports High School.

FULL SCHOLARSHIPS, people. The winning kids will get two-year scholarships at the High Performance Centre in Pretoria, and not only be helped in their football careers, but educated and helped progress as human beings. This, my friends, is bigger than football. And that is why I love it.

So get registered, get voting, and who knows, maybe you – or your a friend/family member – could be meeting up with some legends of South African football in the near future.

P.S There was one lad there, hands in his pockets, who looked a bit special… Tell Lucas, Shorty and Mark to get him signed up 😉 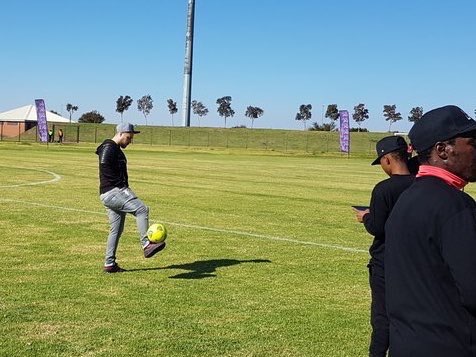 2 thoughts on “Vodacom – Taking Youth Development To The NXT LVL”