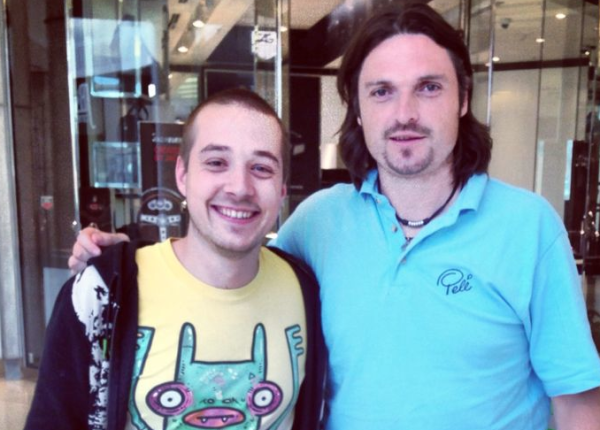 Lutz Pfannenstiel. The name probably doesn’t ring any bells for many football fans around the world, but the journeyman German, who spent 101 days in prison in Singapore and was declared ‘clinically dead’ on a football field during his playing days has one of the most interesting careers that the beautiful game has ever seen. I got the chance to chat with the only professional footballer in the world to play in all six FIFA confederations…

In the early 1990s, at the young age of 18, Pfannenstiel was regarded as one of the brightest goalkeeping talents in Germany and, in his own words, was a ‘rising star’.

However, his eagerness to be playing first team football somewhat hampered his progress, with him turning down some big moves because they couldn’t offer him the one thing that he wanted.

“I had extremely high confidence, but that time the goalkeeping position was for older players. I got three offers, from Bayern, Nuremburg and Bochum, they all wanted me to sign as a reserve goalkeeper who would train with the first team, but play in the reserves. I said that I wouldn’t accept that.

“I was training in Bochum when an agent came to me and said he could get me a full pro-contract in Malaysia with good money, and I was so pissed off that I thought I’d go and then come back to a big league in Europe.”

To his credit, that’s exactly what happened. It didn’t take long for the ponytailed shot-stopper to attract attention to himself while with Penang FA and soon enough he was back on his way to Europe.

“We played some English teams in preseason, they saw me play and I ended up flying to England and training with Wimbledon. They gave me the same contract that Bayern and the others had offered me, and I was back in the same situation that I would have been in Germany. I turned down Bayern and ended up at Wimbledon…”

As was the case with too many of Pfannenstiel’s clubs he struggled to break into the first team at Wimbledon and before too long he was on the move again. This time it was Nottingham Forest who had been impressed, although that also didn’t go well.

But they wanted to keep me on their books, so they offered me a short-term contract so they could loan me out and bring me back if they needed me. It was then that I went to Orlando Pirates in South Africa. I was there for five or six months when (Viktor) Bondarenko was the coach. It was very, very difficult there.”

Pfannenstiel joined ‘The Buccaneers’ just a couple of years after the abolishment of the Apartheid regime in South Africa, and it was understandably difficult for him to settle there at first.

“The interesting part was that I came into a culture that I didn’t know. It wasn’t too long after apartheid and football was a black man’s sport and I was a white guy that didn’t know anything about the politics, but I felt it. I didn’t feel very welcome in the first few days from the boys. They didn’t know me, I didn’t know them, and they were suspicious. However, after they realised that I wasn’t all that bad we started to get on quite well.”

It didn’t help that Pirates, who are based in Soweto, Johannesburg, put the goalkeeper up in one of the most dangerous parts of the city during his time there, although with the help of a couple of suspect characters he made make something of a life for himself there.

“The old office of Pirates was in Hillbrow and I was put up in the old Holiday Inn there. It was quite rough at that time but I was staying in a nice hotel. I was told that I shouldn’t go out much so in the morning I’d be picked up, we’d drive to training and then I’d go back to the hotel, sleep and sometimes head through to Sandton. I was really locked in the hotel.

“I remember fondly there was a very extreme Pirates fan with one leg, His name was Freddie. He was a hardcore Pirates fan and had great contacts to the gangsters and he actually took care of me. He told me that wherever he was I wouldn’t have to worry, so I was running around in the middle of the night in Hillbrow and nobody touched me.”

In what was becoming a bit of a trend for the talented German he soon moved on from Hillbrow and Orlando Pirates, although little did he know that the biggest threat to his career was just around the corner.

In 1999, while playing in Singapore for Geylang United, Pfannenstiel was arrested after being accused of match-fixing, ironically for playing too well, and had to spend 101 days in prison before being acquitted. He lost 16 kilogrammes during his torrid time locked up in one of the toughest prisons in the world.

“That was what really screwed me up completely. I was about to get transferred to PAOK in Greece, everything was agreed and then they took me to jail for something that I hadn’t done. They said I was involved in match-fixing, I was accused of winning three games, playing better than usual. It was the biggest joke I’ve ever heard. It took me some time to get over that.

“The prisons are known to be some of the toughest in the world. We had no bed, no toilet, just a grey room with four walls and 12 people in there. You’re dealing with bad people. If you’re locked up for something you’ve done then you can wake up in the morning and know you’re paying for what you’ve done, for me though I was stuck in the middle of a bunch of hardened criminals for something that was complete bullshit. In Singapore the death penalty still exists, so some of the hard guys have nothing to lose.”

By the time that Pfannenstiel reached Yorkshire club, Bradford Park Avenue, in 2002, he’d already played for 10 different clubs around the world in four of the six FIFA confederations (UEFA, AFC, CAF, OFC) and done hard time in Asia. Yet there was worse to come for the 6”1 ‘keeper.

In a Northern Premier League game against Harrogate Town in December 2002 the German was ‘killed’ on the field of play after a collision with the opposition. Here he recounts his version of his ‘death’.

“It was a collision with a guy called Clayton Donaldson. It was a 50/50 ball on a wet Boxing Day and I came sliding out, he came in at full speed and he was a bit faster than I thought. He realised that he wouldn’t get there, tried to jump over me but ended up tripping himself and fell with his knee right into my sternum. If you get a knock in the sternum the nerve system switches off, the lungs, the kidneys, the heart.

“There were no doctors there, I was cold out and the physio realised I didn’t have a pulse. There was the famous saying, “He’s dead, he’s fucking dead”, it wasn’t the biggest stadium and everyone could hear. I don’t remember anything.”

You would think that that would be enough to kill a footballer’s career, however Pfannenstiel had other plans, after all, he still had two more FIFA confederations to get through…

“Three hours later I woke up in hospital and they told me that I was declared clinically dead three times. They weren’t sure how I’d recover, they said it was 33% that I’d be normal, 33% that I’d die and 33% that I’d have brain damage. I decided to take the first option, even though some of my friends say I took the third one.

“I remember waking up in the hospital and I was pissed off because they’d cancelled the game when we were 2-1 up. I wanted to win that game. I always said though, so many people die of cancer, I’d rather have done it on the football field.”

With the eccentric goalie adamant to return to the pitch despite his close encounter, the doctors told him he needed a break of at least a month before even thinking about going back to training. Once again, he had other plans…

The doctors said I shouldn’t play for four weeks because I had a hairline fracture, but nine days later I played again. Even our most hardened fans said I was crazy and irresponsible. Six days after the incident I turned up at training, the manager said it was nice to see me coming to watch, I said, ‘No, I’m here to train’.

“I played exactly nine days after the accident. It was raining again, I came out, and it was the exactly the same situation. This time I got the ball, threw it and we went through on goal. I was never going to be a chicken about it.”

After leaving Bradford PA Pfannenstiel went on to play for another 15 different clubs, including Vancouver Whitecaps in Canada (CONMEBOL) and Brazilian sides, Clube Atletico Hermann Aichinger and America FC (CONCACAF) giving him a round total of 25 clubs in 13 countries overall, or so he counts.

To this day the crazy goalkeeper from Zwiesel in West Germany remains the only professional footballer in the world to have played in all six of FIFA’s confederations, although (unsurprisingly) he struggles to name one as his favourite…

“That’s a tough one to answer. For me, Brazil is the ultimate football country. At 35 I made my competitive debut in the Maracana and I was the only German to have played in the Brazilian Premier League. It was an absolute honour.”

Pfannenstiel is now working as the Director of International Relations and Scouting for Bundesliga outfit, 1899 Hoffenheim as well as working as a pundit for the BBC and German broadcaster, ZDF. He is also the founder and president of Global United, one of the biggest sporting charities in the world.